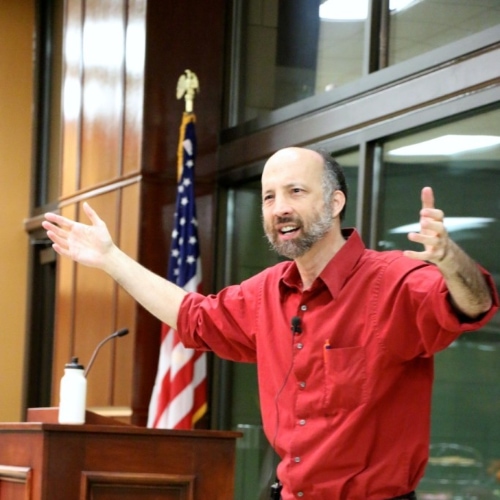 A returning favorite, Dr. Markos continues to inspire and entertain. He is a professor of English and scholar in residence at Houston Baptist University, where he holds the Robert H. Ray Chair in Humanities and teaches courses on British Romantic and Victorian Poetry and Prose, the Classics, C. S. Lewis and J. R. R. Tolkien, and Art and Film. Dr. Markos is the author of eighteen books, including On the Shoulders of Hobbits: The Road to Virtue with Tolkien and Lewis and From Achilles to Christ: Why Christians Should Read the Pagan Classics. A prolific lecturer and writer, he has also written stage adaptations of great works of literature which have been performed off-Broadway and is committed to the concept of the Professor as Public Educator, believing that knowledge must not be walled up in the Academy but must be disseminated to all who have ears to hear. He earned a B.A. in English and history and an M.A. and Ph.D. in English.

When it comes to learning and to teaching, my motto has always been that of Socrates: The unexamined life is not worth living.
–Louis Markos

ASLAN IN THE ACADEMY: WHAT LEWIS CAN TEACH MODERN CHRISTIAN EDUCATORS

In addition to being a famed writer and speaker, C. S. Lewis was a dedicated teacher who, with the same synthetic, shaping imagination he brought to Narnia, creatively integrated his public, academic role as professor and scholar with his private, personal identity as follower of Christ and defender of the faith. In this talk I will discuss seven initiatives that modern Christian educators can take to follow in the footsteps of Lewis.