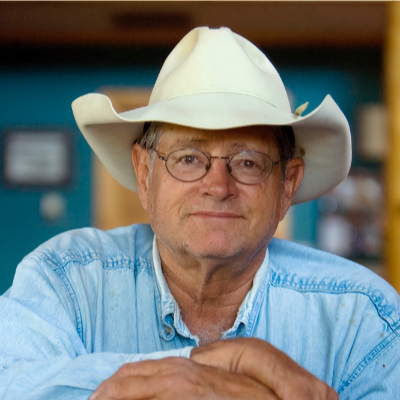 John R. Erickson, a former cowboy and ranch manager, is gifted with a storyteller’s knack for spinning a yarn. Through the eyes of Hank the Cowdog, a smelly, smart-aleck Head of Ranch Security, Erickson gives readers a glimpse of daily life on a ranch in the West Texas Panhandle. This series of books and tapes is a favorite in schools and libraries across the country, has sold more than 9 million copies, is a Book-of-the-Month Club selection, and is the winner of the 1993 Audie for Outstanding Children’s Series from the Audio Publisher’s Association. Publishers Weekly calls Hank a “grassroots publishing phenomena,” and USA Today says the series is “the best family entertainment in years.”

Erickson has appeared in thousands of schools, from Fairbanks, Alaska, to Key West, Florida, and has been a popular speaker at conventions of teachers, librarians, and homeschoolers. And, in 2019, John was inducted into the Texas Literary Hall of Fame.

Hank the Cowdog made his debut in the pages of The Cattleman, a magazine for adults, and when Erickson started getting “Dear Hank” letters, he knew he was onto something. So, in 1983, he self-published 2,000 copies of The Original Adventures of Hank the Cowdog, and they sold out in 6 weeks.

When teachers began inviting Erickson to their schools, Hank found his most devoted fans. Teachers, librarians, and students alike love Hank. According to some Texas Library Association surveys, the Hank the Cowdog books are the most popular selections in many libraries’ children’s sections. The lively characters make excellent material for reading and writing lessons, and turn even the most reluctant readers into avid Hank-fans.

Erickson lives near Perryton, Texas, where he and his wife live today on their working cattle ranch. They have 3 grown children and 4 grandchildren. His advice to young writers is, “Write about something you know. Try to leave your readers better off than they were before.”

Erickson will perform songs and readings from his Hank the Cowdog series. It will be an hour of fun and innocent laughter for people of all ages .

C .S Lewis wrote, “The world does not need more Christian literature. What it needs is more Christians writing good literature.” Classical Christian schools are training writers, students who will want to write stories that are counter to the trends of modern culture . In this workshop, John Erickson will share lessons and advice he’s learned through writing and publishing stories filled with biblical virtues read and enjoyed by believers and unbelievers alike. 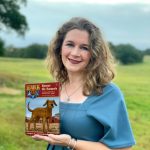 The Hank the Cowdog series…

Praise for Hank the Cowdog

“…Most of us on the American-Statesman web desk grew up avidly reading the “Hank” books,..The iconic children’s series, written by Texas author John R. Erickson, turns 35 this year. With a 70th book on the way in September, there’s no stopping this crime-fighting ranch dog.” – The Austin American-Statesman (2017)

“Hank is the self-proclaimed head of security on a ranch, a canine Inspector Clouseau with a penchant for creative wordsmithing as he narrates his misadventures. “Hank the Cowdog has never aspired to ordinarity,” Hank once said. Three decades after the dog’s debut, there are more than 60 Hank books and a couple of dozen other books from Erickson.” – The Dallas Morning News (2014)

It’s about time the Lone Star State stopped hogging Hank the Cowdog, the hilarious adventure series about a crime solving ranch dog. Ostensibly for children, the audio renditions by author John R. Erickson are sure to build a cult following among adults as well.” – Parade Magazine

“Knee-slapping funny and gets kids reading.” – Fort Worth Star Telegram

“Full of regional humor…vocals are suitably poignant and ridiculous. A wonderful yarn.” – Booklist

“A former regional favorite from Texas now hitting it big in the rest of the country is the Hank the Cowdog Series.” – Chicago Tribune

“For the detectin’ and protectin’ exploits of the canine Mike Hammer, hang Hank’s name right up there with those of other anthropomorphic greats…But there’s no sentimentality in Hank: he’s just plain more rip-roaring fun than the others. Hank’s misadventures as head of ranch security on a spread somewhere in the Texas Panhandle are marvelous situation comedy, his dogservations are so doggone right on that they are little jewels of chuckle, chortle, and guffaw.” – School Library Journal

“Looking for a tape that’s good, clean fun for your kids? Try Hank. This mutt in disguise is adorably pretentious and frequently fumbling, yet never knowing it. Dogdom’s Don Quixote. Nothing escapes his steely gaze – except, perhaps, the perfectly obvious.

In the audio versions, Erickson gives Hank a voice with a detective undertone – a cross between Humphrey Bogart and Maxwell Smart…Come to think of it, Hank’s personality is a cross between the two as well.

And it’s not just for kids; I enjoyed it all by my 40-year old self.” – The Philadelphia Inquirer